Because procrastination is such a common problem, especially for students, we are presenting a series of articles that explore the issue in depth. This week, we investigate how difficult it can be to find a tipping point in order to move into action.

Christopher Scheer is a learning specialist at Touro University California.

The concept of a tipping point originates in physics, where adding a small amount of weight to a balanced object will suddenly and completely topple it. And while there are still raging debates and much research to be done about just how the brain makes decisions, it is generally uncontroversial that there is, metaphorically, a tipping point at which motivational forces push us past inertia and into action.

The English word procrastination comes directly from Latin, where “pro” means “forward” and “crastinus” equals “belonging to tomorrow.” In other words, we’ll move forward tomorrow; or, in the more darkly poetic words of the Jewish prophet Isaiah, “Let us eat and drink; for tomorrow we shall die.”

(Isaiah was actually quoting others here, and there is no evidence he was himself a procrastinator, but this line credited to him was later mashed together with an injunction from Ecclesiastes to “be merry” — to give us the classic excuse for everybody staying up too late on a school night.)

The urge to defer things to mañana — an indeterminate tomorrow which in Spanish can mean a week, two years, or never — is one product of temporal discounting, a fancy economics term for the tendency of humans to value more modest immediate rewards over greater future ones. If you are broke, for example, and are offered $75 today or $100 two months from now, experiments tell us you are more likely to choose the former even though you would be financially rewarded for patience.

Considering our evolutionary roots in ruthless natural settings, this makes some sense; it does us no good to wait for a probable deer that might not show up later if there is a perfectly edible rabbit crossing our path right now.

On the other hand, temporal discounting can cause us some real problems if we don’t handle it with a sense of proportion. A classic parable of the procrastinator, for example, is that of the man who refuses to fix his leaky roof: When it is raining, he can’t work on it — yet, when it is sunny, he sees no reason to bother! 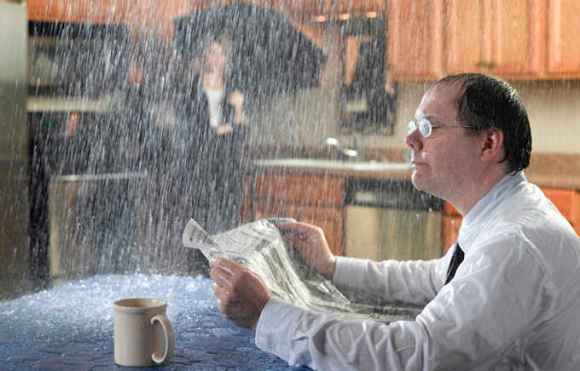 What’s the problem? It is quite refreshing, actually.

What would bring this drippy slacker to an internal tipping point where he would be willing to get out his ladder and start working? (Or, at least call a contractor.) A weather report of an oncoming storm? Thunder and lightning on the horizon? An irritated wife and kids, tired of catching cold? Perhaps it would take a death or serious illness to make him realize how short-sighted he was being.

A cat-accino can be particularly motivational.

The reality is, for a serious procrastinator it can be easier to think about tipping points (and maybe spend two hours researching the concept on Wikipedia), than to actually reach one. If a double cappuccino or a pep talk from your mom is not enough, it may be that you need to add a LOT more water to your personal river before it is going to break through that dam blocking your exciting journey.

Because just because a tipping point exists doesn’t mean we are close to it. Imagine if one end of a see-saw holds an NFL offensive lineman and the other supports a toddler; that kid can jump and stamp like a madman and nothing in the physical status quo is going to change — and nobody is going to want to wait until he grows up to see if he can ever make it happen!

So it is with changing a habit. Perhaps you were not a procrastinator in high school, where the due dates were tight, the day was tightly structured, and individual assignments carried little weight, yet are struggling with the freedom and high stakes assignments of college or grad school. In this situation, some modest interventions — joining a study group and creating a review schedule, for example — may be enough to tip your needle back into a positive groove. Or, maybe you don’t procrastinate in the mornings but struggle to focus in the afternoons; here adding a walk, a cup of coffee or a short nap may be enough to push you back into the productivity zone.

Yet, if you are procrastinating work on your doctoral thesis because you never wanted to be a professor in the first place (and consequently are likely depressed and self-sabotaging), no clever time management or accountability system is likely to fundamentally change the equation. Similarly, if you have an anxiety disorder or are suffering from attention deficit problems, making elaborate to-do lists or ambitious study schedules may actually increase your sense of being overwhelmed, or become a new form of distraction.

if you have an anxiety disorder or are suffering from attention deficit problems, making elaborate to-do lists or ambitious study schedules may actually increase your sense of being overwhelmed, or become a new form of distraction.

Really, we are talking about a matter of scale; if we buy the concept of a tipping point, our decision-making process can be cast in mathematical terms: A moment of “critical mass” is created when the total quantity of forces pushing one way reach a vector force which triggers action. And for the severe procrastinator who has tried and failed to change — usually many, many times — the typical tools offered are employing addition, when they need to use multiplication.

Because here is the obvious reality: Not all the inputs carry equal weight, not even remotely; in fact, some are exponentially “heavier” than others, and so any successful intervention has to have some real heft, as well. The most obvious example of this is the addict who will choose their drug of choice over food, sleep, money, or even sex. And for the severe procrastinator, compulsively avoiding painful or frightening tasks or experiences has all the hallmarks of a terrible addiction: Lack of impulse control, emphasis on short-term pleasure over long-term goals, self-destructive priorities, and so on.

“Procrastinators do not have a problem with time management,” argues the basic text of Procrastinators Anonymous. “They have a problem with compulsive avoidance. Addiction and compulsion are about escaping the present moment – not being present in your life, not experiencing the reality of your life. People procrastinate as a way to not be present in their lives because they have addictive personalities, and this is the particular form their addiction takes.” 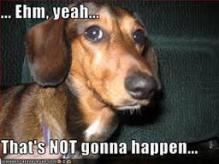 Demand resistance is usually not this cute.

If you are suffering from Demand Resistance, defined as “a chronic and automatic negative inner response to the perception of pressure, expectations, or demands,” this insight can be the key to unlock a previously closed door of motivation.

Simply put, it is essential that we be able to integrate what we must do and what we want to do, so they are not in opposition.

This is what is happening when somebody uses a higher moral calling to push through difficult work. I hate this job, but I love my child and I want to provide for her. I am afraid of taking the medical boards, but I am motivated by my desire to help sick people. Less altruistically, many of us are afraid of how we will be perceived if we fail to meet a deadline or pass a test; our fear of losing status drives us onward: It will please my parents if I bring home good grades.

Like anything that involves changing the status quo, however, this is much easier said than done! For severe procrastinators, aggressive interventions must be sought; they will need the help of others to break out of the dysfunctional cycle.

Next week:Interventions for Severe Procrastination

The Procrastination Series on EfficientLearning.org: